How to choose ultrasonic welding parameters？

How to choose ultrasonic welding parameters？

Amplitude A, static pressure F and welding time t, in addition to the choice of ultrasonic power and the interaction between the parameters. In ultrasonic welding, spot welding is the most common application. The following is an example of spot welding to discuss the influence of various parameters on welding quality.

2. The amplitude A amplitude is one of the basic parameters in the ultrasonic welding process. It determines the magnitude of the friction power, which is related to the removal of the oxide film on the welding surface, the frictional heat generation of the joint surface, the size of the plastic deformation zone, and the condition of the plastic fluid layer. . Therefore, the correct selection of the amplitude value according to the nature of the material to be welded and its thickness is a prerequisite for obtaining a highly reliable joint. The range of amplitude is generally 5 to 25 μm. Low-power ultrasonic welders generally have high vibration frequencies, but the amplitude range is low. Low-hardness welding materials or thinner weldments should use a lower amplitude; as the hardness and thickness of the material increase, the selected amplitude should be increased accordingly. This is because the magnitude of the amplitude corresponds to the relative movement speed of the contact surface of the weldment, and the temperature of the weld zone, the plastic flow, and the magnitude of the frictional work are determined by the relative movement speed. For a specific weldment, there is a suitable range of amplitudes. When the amplitude A is 17 μm, the solder joint has the highest shear strength, the amplitude decreases, and the strength decreases. When the amplitude is less than 6 μm, the joint has not been formed, and the time for increasing the vibration effect has no effect. This is because the amplitude value is too small and the relative movement speed between the weldments is too small. When the amplitude value exceeds 17μm, the solder joint strength decreases, which is mainly related to the fatigue damage inside and on the metal material. Therefore, the amplitude is too large, and the vibration shear force transmitted from the upper sound electrode to the weldment exceeds the friction between them. The force, the relative sliding friction between the sonotrode and the workpiece, and a large amount of thermal and plastic deformation, resulting in the upper acoustic pole embedded in the weldment, resulting in a reduction in the effective joint cross section. The transducer material and concentrator structure of the ultrasonic welder determine the amplitude of the welder. When they are determined, the amplitude is changed, typically by adjusting the electrical parameters of the acoustic generator. In addition, the choice of amplitude values is related to other parameters and should be considered together. It must be pointed out that in the appropriate amplitude range, the use of a large amplitude can greatly shorten the welding time and improve the welding production efficiency. 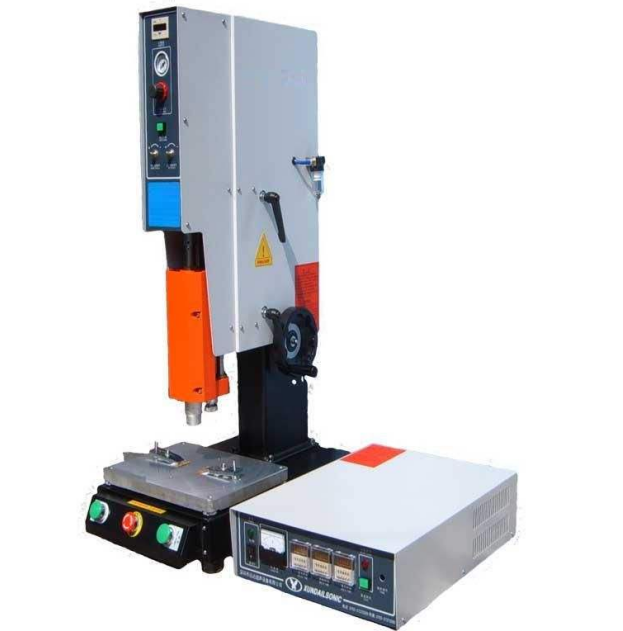 3. Static pressure F The role of static pressure is to effectively transmit ultrasonic vibration to the weldment through the sonotrode. The amount of static pressure required for ultrasonic welding varies according to the type of material. When the static pressure is too low, since the ultrasonic waves are hardly transmitted to the weldment, it is not enough to generate a certain frictional work at the interface of the two weldments, and the ultrasonic energy is almost completely lost in the surface sliding between the upper acoustic pole and the weldment. It is impossible to form an effective connection. With the increase of static pressure, the vibration transmission condition is improved, the temperature of the weld zone is increased, the deformation resistance of the material is decreased, and the degree of plastic flow is gradually increased. In addition, due to the increase of compressive stress, the area and connection of plastic deformation at the contact point The area is increased and the strength of the joint is increased. When the static pressure reaches a certain value and then increases the pressure, the joint strength no longer increases or decreases. This is because when the static pressure is too large, the vibration energy cannot be reasonably utilized, the frictional force is too large, the relative frictional motion between the weldments is weakened, and the amplitude value is even reduced, resulting in the connection area between the weldments. No longer increase or decrease, and the crushing of the material causes the actual joint cross section of the joint to decrease, which reduces the strength of the joint. In the case of other welding conditions, the high static pressure can be used to obtain the same strength solder joints in a shorter welding time because the higher static pressure can be generated at a lower temperature in the early stage of vibration. Caused by plastic deformation. At the same time, the use of high static pressure can reach the highest temperature in a short time and shorten the welding time.

5. Welding power P When ultrasonic welding, the choice of power depends mainly on the thickness of the weldment and the hardness of the material. Since the measurement of ultrasonic power is difficult in practical applications, the amplitude is often used to represent the power, ultrasonic power and amplitude. The relationship can be determined by: P = μSF υ = μSF2Aω / π = 4μSFA? (1) where P - ultrasonic power; F - static pressure; S - solder joint area; υ - relative speed; A - amplitude ; μ - friction coefficient; ω - angular frequency (ω = 2π?); ? - vibration frequency. In ultrasonic welding, the amplitude is selected from 5 to 25 μm. When the transducer material, structure and power are selected, the magnitude of the amplitude is also related to the amplification factor of the concentrator. Generally, when determining the mutual influence of the above various welding parameters, it can be achieved by drawing a critical curve, and FIG. 18 is a critical relationship between static pressure and power. The actual pressure is generally selected using the static pressure at the minimum available power and a slightly higher power value than the minimum available power. The above several welding parameters are not isolated, but are mutually influential and interrelated, and should be considered together. For example, in the ultrasonic welding of plastics, the quality of the joint depends on the interaction of the amplitude, static pressure and welding time of the transducer. The welding time t and the weld head static pressure F are adjustable, the amplitude is determined by the transducer and the horn, and the three quantities have an optimum selection value for each other. When the welding energy exceeds a suitable value, the amount of melting of the material is large, resulting in a large deformation. If the welding energy is too small, it is not easy to weld. In addition to the welding parameters, factors such as the upper acoustic material, the shape size and its surface state also have an effect on the quality of the weld.