Liquid atomization is a process in which a liquid film, disturbed by enough surface disturbance in the normal direction, separates from the surface and splits into small droplets, such as mist in the gas phase. Liquid atomization plays an important role in spray drying, coating, spray cooling, incineration and combustion of liquid fuel and waste, preparation of fine powder, preparation of emulsion and other industrial processes. In these applications, most of the droplets are required to have the required size distribution. Unlike traditional atomization, ultrasonic atomization can be more efficient. It only needs electric energy to be transmitted to piezoelectric transducer to drive the nozzle to resonate. Droplets have no moving parts, only mechanical vibration generated by the electrical energy provided is used to produce droplets. Because no additional energy is needed, the size distribution of droplets can be better controlled by ultrasonic atomization.

The generation of ultrasonic atomization is based on capillary wave effect and cavitation effect. When a low power is applied to a 20KHz ultrasonic atomizer, a regular grid structure is observed on the surface of the atomizer, which has the same number of peaks and troughs per unit area, called capillary wave. This low power input produces surface interference without actual droplet injection.

The formation of cavities near the atomizer surface and in the liquid film and the subsequent collapse of these cavities result in the local release of a large amount of energy; therefore, compared with the low spray velocity observed in the case of capillary wave propagation, the cavitation effect greatly increases the spray velocity of droplets. At the same time, the surface area occupied by the liquid at the tip of the atomizer decreases with the increase of the frequency of the atomizer, which makes it difficult to capture capillary waves on the surface.

Droplet size (dp) increases with the increase of flow rate (Q), which can be attributed to the increase of the thickness of liquid film formed on the vibrating surface before actual atomization. When the liquid flow rate is slightly higher than the critical flow rate needed to wet the tip surface of the nozzle completely, the liquid diffuses as a thin liquid film and has multiple capillary waves composed of peaks and troughs.

When the liquid velocity is obviously higher and the ultrasonic vibration condition remains unchanged, a thicker liquid layer is formed on the surface of the atomizer, which leads to the deformation of uniform capillary wave. This irregular capillary wave leads to the formation of droplets with higher droplet size and larger size distribution. Moreover, with the increase of the thickness of the layer on the surface of the atomizer, oscillating cavitation bubbles or bubbles are observed very close to the surface of the atomizer, which grow rapidly and collapse to spray droplets from the peak prematurely, resulting in cavitation effect. Any further increase in the flow rate will result in droplets falling and the droplet size distribution becomes wider.

Effect of Power on Droplet Size

The velocity of droplets increases with the increase of ultrasonic power, which can also be attributed to the increase of vibration amplitude at the tip of the atomizer and the increase of cavitation effect in the release of acoustic energy. When the spraying motion is vertical, gravity also affects the kinetic energy of droplets larger than 150 um. For applications such as surface coatings, it is not desirable to operate under high power conditions, because droplets bounce back after hitting the surface and may form irregular shapes on the surface, resulting in uneven coating. 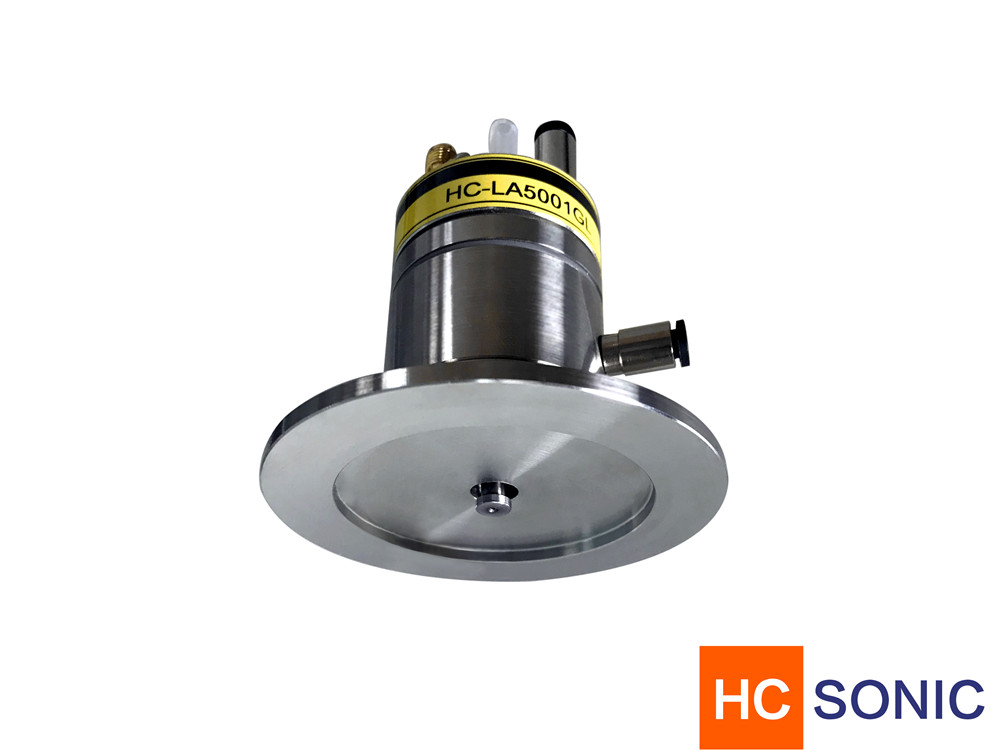